In terms of NBA history, this game was special

If successful, Gregg Popovich became the leader in the number of wins among all basketball coaches in history. Yes, the season is still a month away, and Gregg would definitely have time to beat Don Nelson’s record of 1335 wins, which he equaled on Monday. But everyone wanted to see it on the Spurs’ home court. The first attempt – the day before yesterday against Toronto – was unsuccessful.
But on the second try, the Spurs made a gift to their basketball coach and fans. And the stubborn ending, where everything was decided by free throws, added atmosphere to the historical moment. 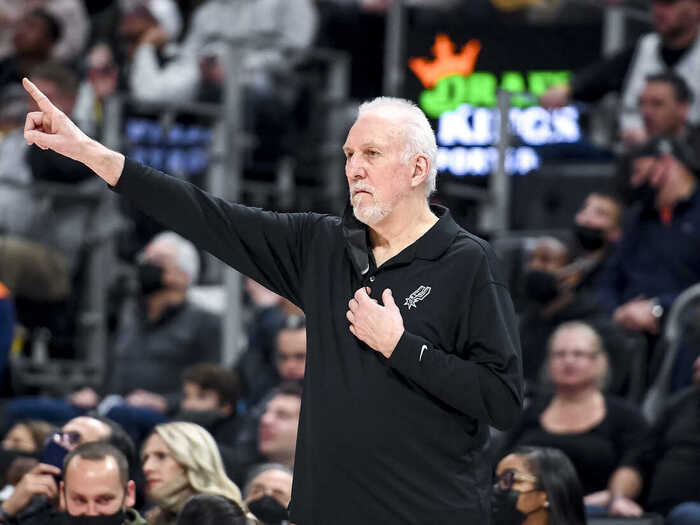 Even during their playing careers, the future great coaches Gregg Popovich and Larry Brown met – Popovich represented the US Air Force basketball team at the 1972 Olympic team screenings, and Brown ended his playing career, was looking for where to gain coaching experience, and therefore was called up as a volunteer coach in the Olympic camp and helped to weed out the players at the training camp. Brown eliminated Popovich in the US national basketball team selection, and a few years later, when he became the Denver coach, he again eliminated Gregg in the Nuggets training camp. But good relations remained – Brown and Popovich grew out of the same coaching tree: Bob Speer coached Popovich at the Air Force Academy (and Hank Egan was his assistant and successor, and Gregg also got his first coaching job with Egan), and Larry Brown played and later worked assistant at the University of North Carolina under the great Dean Smith – well, Dean Smith was also an assistant to Speer at the Air Force Academy.

And as you know, there is no stronger connection in basketball than between coaches from the same student branch.
Brown continued to follow Popovich’s work in the Air Force and Pomona-Pitzer, and in 1986 invited him to the University of Kansas for a season as an assistant. In 1988, the eternal wanderer Larry again changed jobs, returning to the NBA, and again called Popovich to him. In San Antonio.

So Popovich became an assistant in the NBA. And basketball assistants in the NBA are usually not noticed until they become the main ones, but Brown immediately prepared his assistants for independent work.

Already in the preseason, Brown delegated work with the team to assistants

Firstly, because of health – Larry had problems with blood vessels. Secondly, the temperamental Brown knew that he was unlikely to last all 82 matches without disruptions to the judges. “I usually miss one preseason game because I know I will be kicked off the bench someday during the season. And I want to give assistants the experience of managing a team.”

By the start of the basketball season, Brown’s health returned to normal, but the prediction also came true. Brown was nervous that season, probably even more than usual – the club constantly lost, the coach publicly cursed with the management. The main concern is that after such a disastrous season, David Robinson will not want to go to the Spurs. The center was taken first in the draft in 1987, but he decided to serve two years after that at the Navy base, and in 1989 he had the right to become a free agent and sign to any club.
In general, there were enough problems. Never before, and never since, have Brown’s team lost so often, with only 21 wins in a season.
And in fact, one of those 21 wins is not Brown. March, the end of the season, the bottom-dwelling Spurs host Washington, who hasn’t lost their chances of reaching the basketball playoffs, with Bernard King. San Antonio also has King, Bernard’s younger brother Albert, but he is much worse and generally injured.

In general, there is still the same composition here: leader Alvin Robertson does not talk to Brown, another defender Johnny Dawkins is constantly sick, starting center Mike Smrek weighs 500 kg and cannot play more than 10 minutes, but there are three Andersons at the start (Willie, Michael and Cadillac) Greg).

In the middle of the second quarter, Larry Brown was furious with the judges, because of a badly tossed controversial ball. Young referee Derrick Stafford expelled Brown – and the basketball team was led by his assistant Gregg Popovich, who had worked in the third division of college basketball six months ago.

All wins go to the head coach’s file, even if he was not present at the game at all

Popovich himself received a few extra ones to offset his 1336, although he retired or missed basketball games for health reasons or for personal reasons, and his assistants, from Mike Budenholzer to Ettore Messina, led the Spurs to victory.

Because of this rule, there are curiosities – when Steve Kerr missed the start of the 2015/16 season due to back surgery, Luke Walton was appointed interim head coach of Golden State. The Warriors got off to a 24-0 start, Walton was named NBA Coach of the Month – but he officially won the award without a single win. All matches, wins and losses (39-4) went to Kerr’s credit. And it was Steve who won the Coach of the Year award, although he coached less than half the season and won fewer de facto matches (34-5) than Walton.

Returning to Popovich, he now overtook Don Nelson in NBA victories, and after all, after working for Larry at the Spurs, Popovich managed to work for Nelson at Golden State before returning to the CAS, first as a general manager, and then to basketball coaching .

Gregg Popovich, you are the greatest coach of all time

After setting the record, Popovich was unusually emotional. “This is our overall record. This is not my record. It belongs to all the people in this city. Many are related to this. Such things cannot belong to only one person. Basketball is a team sport.